2020 has been a dramatic and unforgettable year so far. While much of it has been dominated by Coronavirus, last month worldwide protests for equality and justice for black people filled the news. The protests were triggered by the killing of George Floyd by members of the US police force in Minnesota on the 25th May, and brought new energy to the Black Lives Matter movement.

Sadly, in the Western world, we still live in a society that doesn’t treat all people fairly or equally. While as a white person I have never experienced racism directly, I have witnessed it second-hand as friends and colleagues have. Racism is not justifiable and we all need to stand up and stamp it out.

Manchester’s multicultural population has helped to make it the great city that it is today. Last month, over on Twitter, I decided to put out a positive message about black people to help raise awareness of the Black Lives Matter movement. I shared many pictures of street art from across the Northern Quarter taken over the last few years that featured black men and women. A celebration of black lives. I’ve picked just some of my favourites to share with you below.

Miami based artist Axel Void visited Manchester back in 2016 to paint this beautiful mural for the Cities of Hope festival. 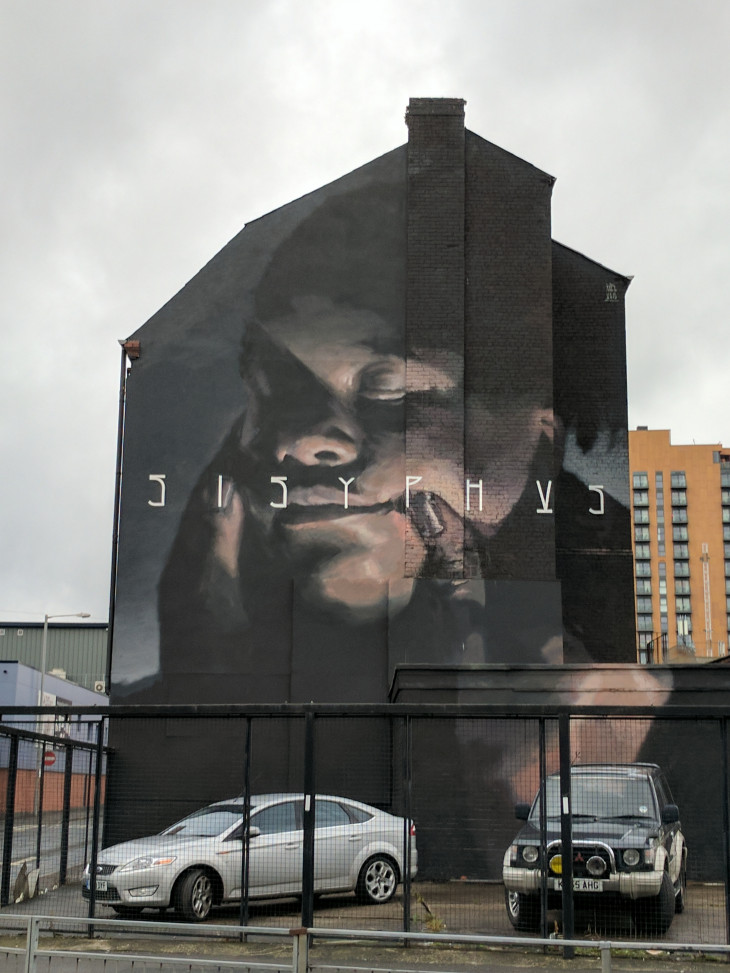 Beyond the Northern Quarter, he returned to Manchester in 2019 to paint this Peterloo mural on the side of the People’s History Museum featuring a black mother and child. 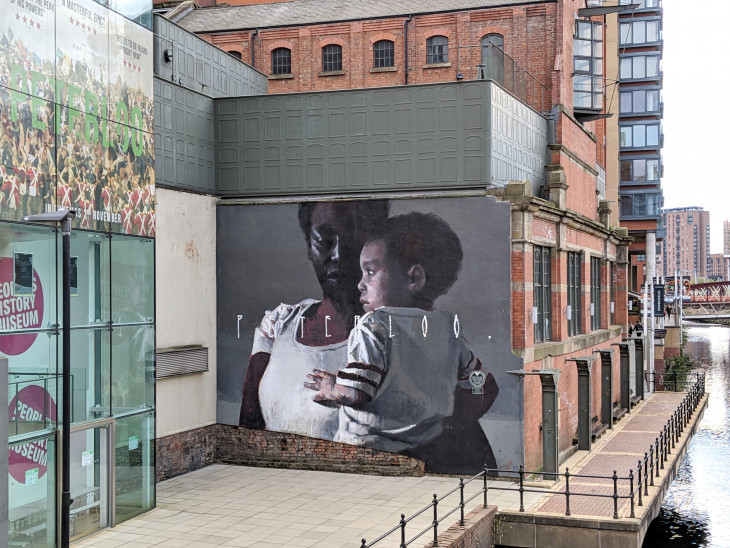 Another mural from 2016’s Cities of Hope festival. This large mural of two black men embracing is by South African street artist Faith 47. A reminder that gay lives matter too.

This piece by Nomad Clan was created last year for Dr Martins. It’s slogan “Respect my Existence or Expect my Resistance” seems very fitting with the events of the last month and a bit. 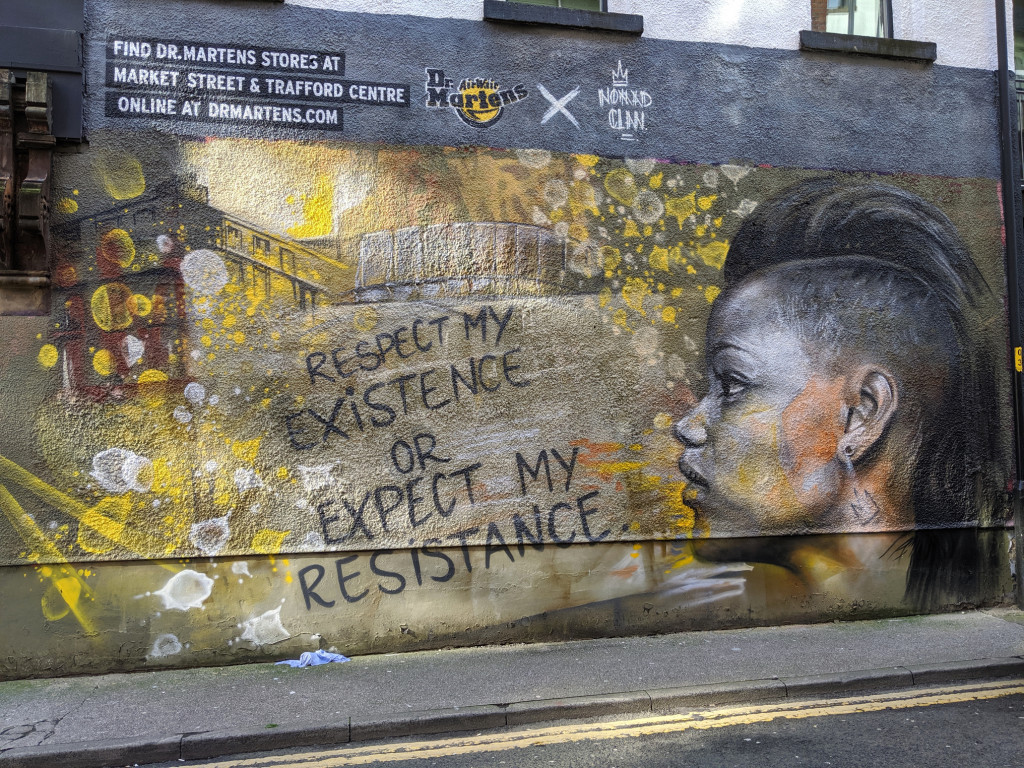 I always love seeing what’s new on the Tib Street substation. The artwork is forever changing. Pawski’s Shaft inspired artwork from a few years ago remains one of my favourites. I love how those red curves highlight the main portrait. 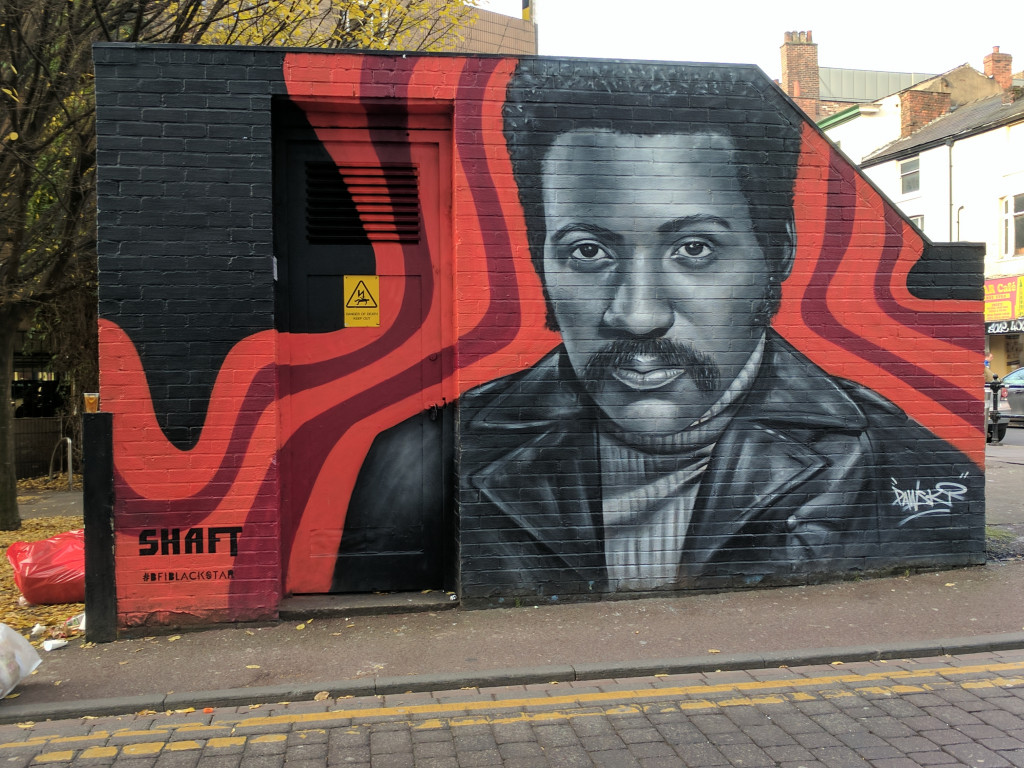 Here’s another piece from the Tib Street substation. Painted in 2018, this was Venessa Scott’s contribution to the Out House project that organises these artworks. 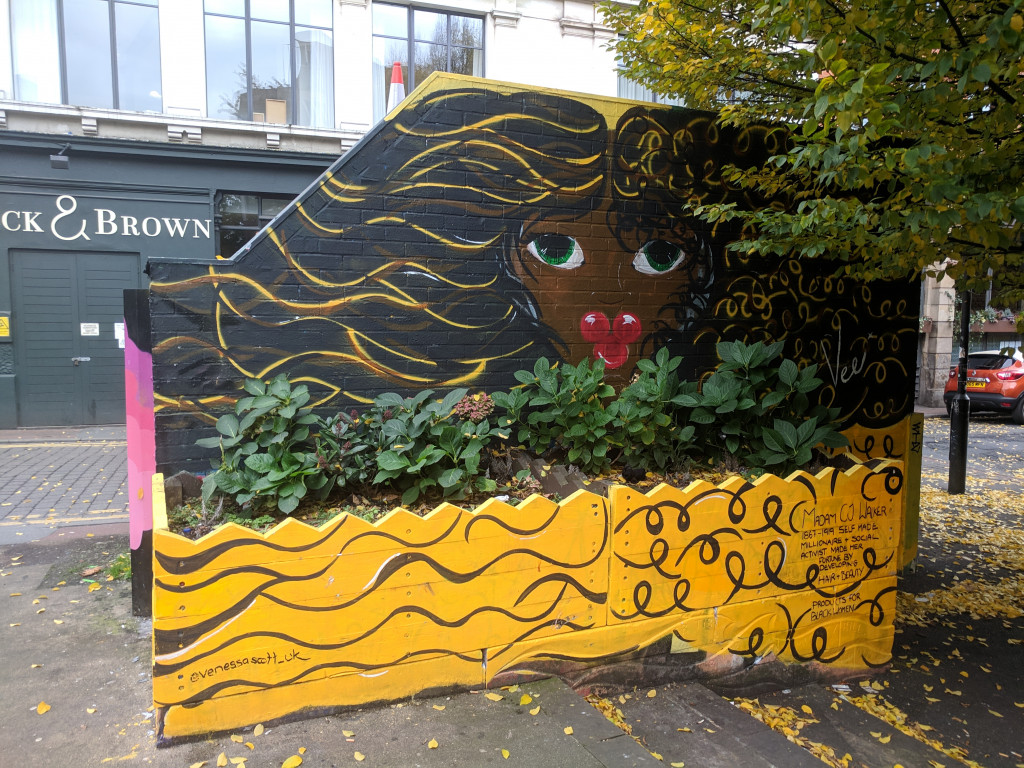 Sheffield based artist Trik 9 regularly features black and asian women in his artwork. This was his contribution to Stevenson Square back in 2016. 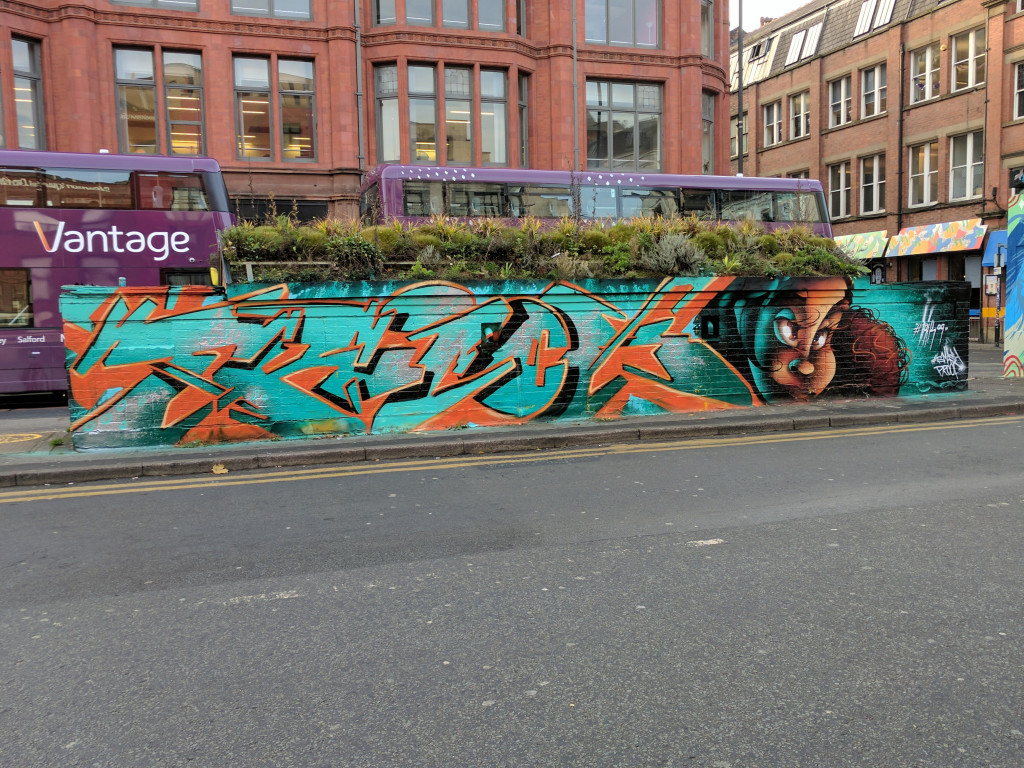 Finally, a couple of pieces by Manchester’s Akse. His work is always astounding.

In 2014 he painted this portrait of Nelson Mandela in Stevenson Square. 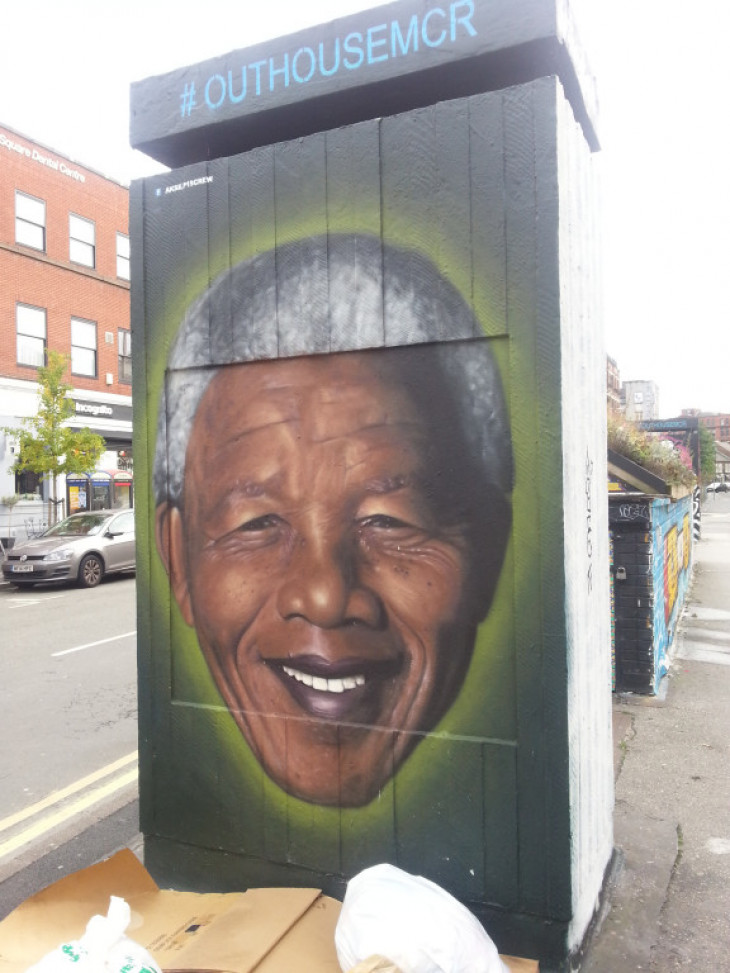 Lastly, Akse painted this wonderful tribute to George Floyd, also in Stevenson Square, just last month (photo courtesy of the artist). This incredible piece can be seen in many photos of the Black Lives Matter protests that took part in the Northern Quarter. Hopefully Geroge’s terrible death will lead to a much fairer and more equal society for all. 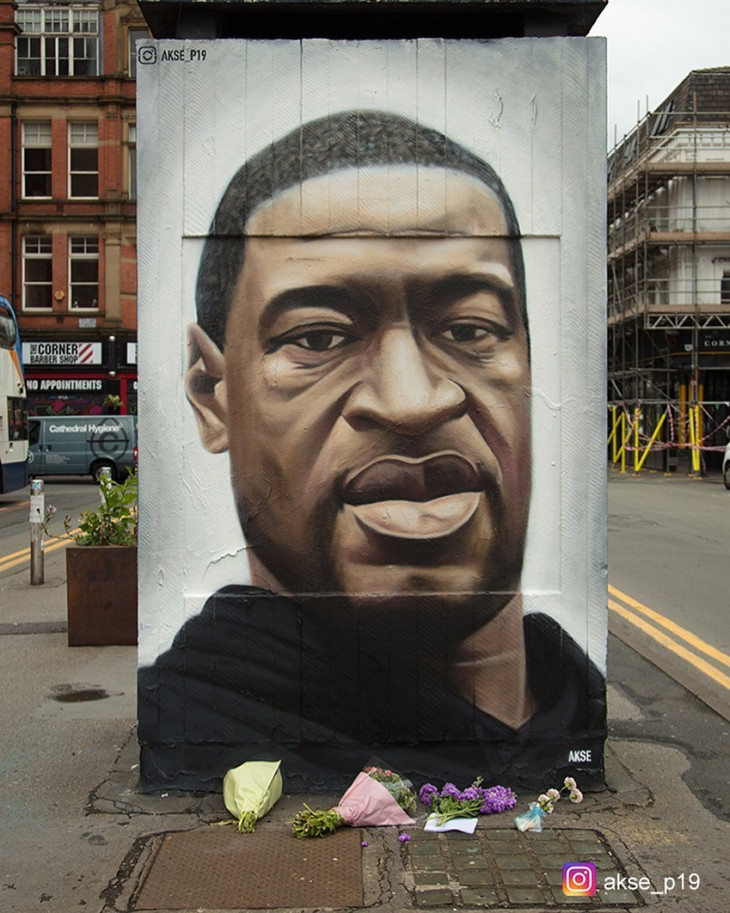 Latest from the Gallery 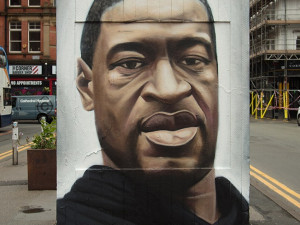 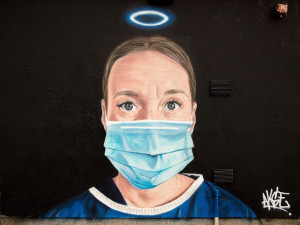 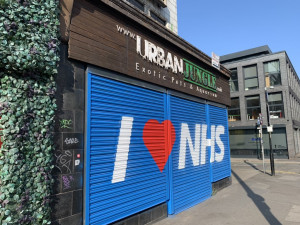 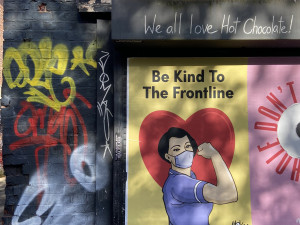